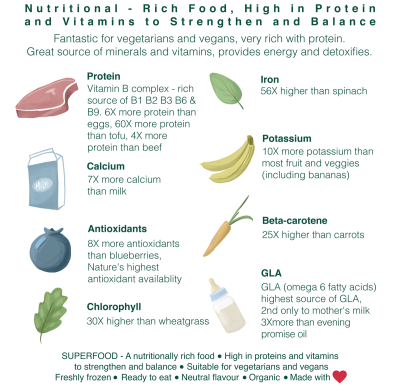 By Fresh Spirulina on May 4, 2017 in Spirulina, Spirulina Benefits

Spirulina, also known as blue-green algae, is one of the most popular algae in the world as dietary supplements dedicated to fitness. So that we know a little more about this new but famous food, we tell you all about spirulina algae: its properties, benefits and uses in the kitchen.

The properties of spirulina algae

Nutritionally–Rich Food, High in Protein and Vitamins to Strengthen and Balance

Spirulina microalga (singular) is plant food (not a drug or medicine), one of the most concentrated with good nutrients, especially its protein content, which can be in between 60% in the dehydrated form (71% in the fresh raw form). The protein spirulina is abundant with accompanied by a good contribution of fibre, complex hydrates and fats in a lower proportion, among those, the emphasis is on the omega-6 and omega-3 fatty acids, the essential polyunsaturated fats that the body can’t produce itself.

Spirulina is also contributing vitamins and minerals to our body among them are included the B vitamins, calcium, iron, potassium, iodine, carotenes and vitamin E, the latter two providing antioxidant function.

Due to the spirulina nutritional rich spectrum, spirulina is widely used as a food supplement that may have different effects on the body, that includes acting as a promoter of the immune system. It has been shown that spirulina stimulates the activity of the defensive cells and the production of antibodies, antibodies which act against viruses and bacteria and even have a natural anticancer effect. (Nutritional and Therapeutic Potential of Spirulina)

Additionally, the quantities of fibre spirulina holding within it could act as a prebiotic in the intestine favouring the activity of the microflora of our body. Such activity raises the defences and showed the potential to reduce the nephrotoxicity of heavy metals and drugs and its ability to decrease the radiotoxicity.

The richness in protein and antioxidants makes spirulina algae an interesting sports supplement. In a study conducted by Taiwanese scientists have shown that it’s using spirulina in a recovery drink reduces muscle damage and oxidative stress that can be caused by exercise (especially in untrained/unfitted people). It was also found that spirulina algae can reduce the physical exhaustion after a workout and hence favour recovery after training. (Preventive effects of Spirulina platensis on skeletal muscle damage under exercise-induced oxidative stress)

A study published under the Cardiovascular Therapeutic the research indicates that spirulina favours the prevention of heart and vascular diseases due to its hypolipidemic and anti-inflammatory properties. Not only that, but it could also contribute to the antioxidant, protein, fibre and essential micronutrients content in the body and the glucose in the blood which translates into an anti-diabetic effect. (Hypolipidemic, Antioxidant, and Antiinflammatory Activities of Microalgae Spirulina)

Finally, although many use spirulina algae as a weight-loss supplement, its efficacy is still uncertain and there are no studies that can prove its usefulness in this manner, although, due to its richness in proteins and fibre, it could contribute along with training to maintain healthy good body composition and maintain health for all the aforementioned benefits.

How to use Spirulina in the kitchen

Given the varied benefits and many nutrients that spirulina algae can offer, many will want to start using spirulina in their dishes. We can incorporate fresh raw spirulina or freshly frozen spirulina as it’s not taking over the food’s flavour it’s added to and is odourless.

Fresh Spirulina in a jar

We can make combinations of healthy smoothie recipes and nutritious juices with spirulina to drink after training or as part of a breakfast or snack. We can go to more elaborate dishes such as algae soup where we add fresh spirulina.

Since we can wash the spirulina and use it as we would use any other green leaf, it is also possible to make stir-fries, pies or pies combining the spirulina with other vegetables or meats for example.

If we use the spirulina algae in raw/frozen form, we can add a spoonful of spirulina algae to a sauce, a filling of empanada, a salad, to the breakfast oats, smoothies, guacamole and others to enrich them with the spirulina’s great nutrients and healthy properties.